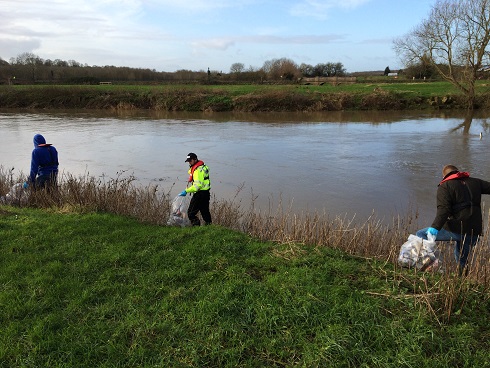 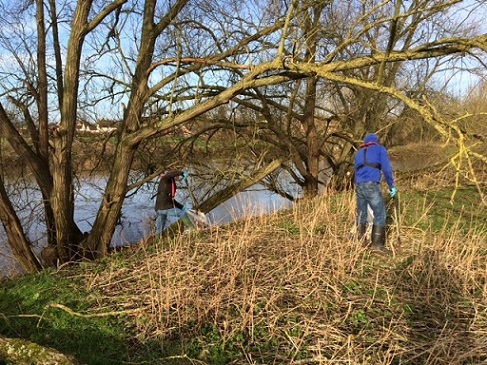 Operation Leviathan:- Use of Restorative Justice to punish offenders caught fishing without permission.

“During one of the Operation Leviathan days of action, last year, the Police and the Environment Agency found two Pershore men  fishing a B.A.A stretch of the River Avon without permission.

Most anglers know that to fish any river or body of water without permission from the owner is an offence under Schedule 1 of the Theft Act 1968.

It was agreed, with the B.A.A the offenders, previously of good character, could pay their debt to society by carrying out a morning litter picking along the stretch where they were caught, rather than face prosecution.

The heavy winter rains have prevented this taking place till now but on Saturday (30th January) the two men met with  SC James Macbryde and Pc Paul Lambon of Malvern Police  at the Old Bridge to carry out the ‘punishment’.

Following the issue of personal safety equipment, provided by the Environment Agency and Malvern Town Council,  the two men, assisted by the officers, cleared the entire stretch managed by the B.A.A.

Whilst this exercise is an alternative to more punitive punishment, it  is only suitable for low level offences.

The real aim of Operation Leviathan is catch and convict the type of criminal that can cause greater harm to the sport by using nets, traps and long lines to remove fish. This type of offender is often involved in other types of organised crime.

We will continue to work closely with the Police, the Angling Trust, the National Wildlife Crime Unit, the E.A, the B.A.A and other clubs to raise public awareness, increase the flow of intelligence and build confidence that fisheries enforcement is important and the law will be enforced.

The result of today’s exercise was four large bags of rubbish collected along with a rubber duck!  It seems apt the duck should now become a symbol for future such events. Given the name ‘Daisy the Duck’ by SC Macbryde, Daisy will now feature in future Operation Leviathan days of action as a mascot.”