Coventry Canal: There is no vehicular access or parking at Bridges 86 or 87 they are only accessible via the towpath.

Brookhay Bridge 88 - This Bridge is accessible via Brookhay Lane off the A38 and the lane that runs alongside the canal from Bell Bridge 89 on the A38. There is parking and towpath access near to Bridge 88. Along the lane between Bridges 88 & 89 the hedge is thick in places; there is a gate and stile giving towpath access with verge parking about halfway, going on towards Bridge 89 the hedge is replaced with fern giving easy access to the towpath. The lane is narrow with light traffic and a dirt parking lay-bye about halfway along.

Bell Bridge 89 - This is the bridge that takes the A38 over the canal. There is parking and towpath access on the lane that runs alongside the canal from the A38 toward Bridge 88. You can also cross under the A38 using Bridge 89 towpath to access more of the canal. The towpath is wide and grassy.

Fradley Bridge 90 - Bridge Farm Lane cross this bridge and motor vehicles are blocked from crossing the bridge, but you can drive up to the bridge.

Gorse Lane Bridge 91 - This bridge gives towpath access with nearby parking in a lay-bye just over the bridge and by the junction with Hay End Lane.

The towpath then continues up to the canal junction.

Prohibition signs are mandatory. Anglers fishing near overhead power lines do so at their own risk.

NO FISHING AT NIGHT. 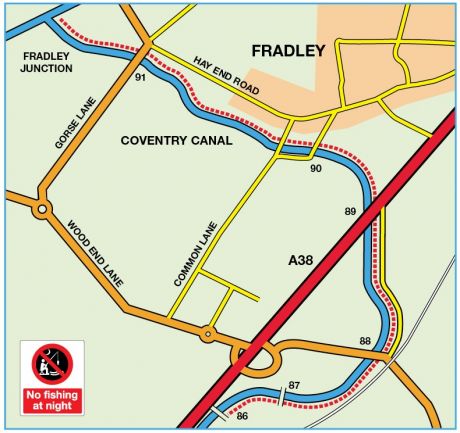 More locations on the canals