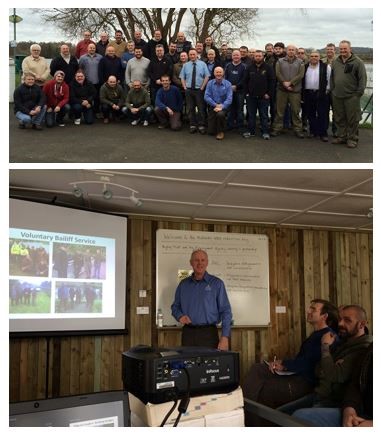 The Angling Trust and Environment Agency partnership has now made possible the keenly anticipated national roll-out of the Voluntary Bailiff Service (VBS), following a pilot project in the South East.

Kevin Pearson said: "This was a fantastic day for angling in the Midlands with 33 volunteers joining Phase 1 Voluntary Bailiff Service and offering their support to the Environment Agency and the Police in tackling poaching and all angling-related crime. I am very optimistic about the future and already have more volunteers ready to join at the next induction later in the year."

The event was attended and supported by the Environment Agency together with Chief Inspector Martin Sims, Head of the UK National Wildlife Crime Unit, and PC Paul Lambon from West Mercia Constabulary.

PC Lambon, a key-player in Operation Leviathan, a high profile multi-agency, multi-force, operation focussing on illegal fishing and fish theft, said: "From a policing perspective I am extremely pleased the Voluntary Bailiff Service is now up and running in our area. It’s early days and we shouldn't expect to see huge changes overnight, but by working together we will make a difference: we are stronger together."

Environment Agency Fisheries Enforcement Officer Chris Ponsford contributed to training at the induction and said: "The Environment Agency welcomes the opportunity to work with enthusiastic volunteers to help us in our continuing crackdown on illegal fishing and those that cheat angling by not buying a licence.

"We take illegal fishing very seriously. Anyone fishing illegally can expect to be prosecuted and face a substantial fine. The Volunteer Bailiff Service is an additional resource we can call on in the fight against evasion and illegal fishing.”

Angling Trust National Enforcement Manager Dilip Sarkar MBE said: “Protecting fish and fisheries is surely important to all anglers and it is great to see freshwater rod licence income being constructively spent in this way.

"Some find it hard to understand why Phase 1 Volunteer Bailiffs have no power - this is because Phase 1 volunteers fulfil a crucial role: reporting information and evidence for the police and Environment Agency to act upon. This is because the entire system is 'intelligence-led' – meaning that such reports, and those from anglers and the wider public, are absolutely essential.

"Our volunteers are trained to make reports to a high evidential standard, and help raise awareness. Policing methods have changed, so to properly support the Environment Agency in particular, we have to respond to this."

Sarah Chare, Deputy Director for Fisheries, Biodiversity and Geomorphology at the Environment Agency said; “I really welcome our partnership with the Angling Trust volunteers, which is funded entirely by anglers’ rod licence fees, and the support given by the police. This will make a huge contribution to our efforts to reduce illegal fishing and rod licence evasion.”

By 12th March, similar inductions will have been held in all six regions across England – meaning that Operation Clamp Down 4, the annual multi-agency initiative focussing on illegal fishing during the coarse close season, will be a national operation for the first time.