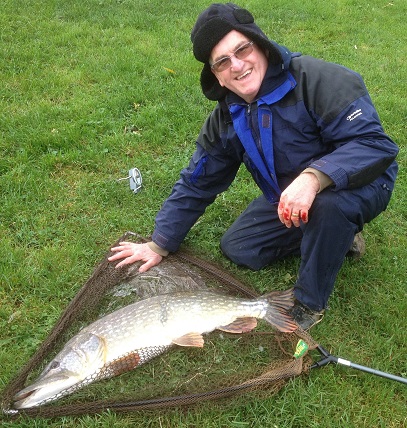 I have been a fisherman since my dad first took me to the River Avon at the age of four, I am now sixty-five and on Monday 10th-December-2018 I visited the fabulous BAA Waters at Fladbury Mill, (a venue that I fished many times over the last 60 odd years).

Following the sad news of the recent death of the late and great John Wilson I re-read the pike fishing section in his book "Go Fishing Techniques" . Therefore my aim on Monday was to fish for the Pike that are known to inhabit this stretch of the River Avon.

I used a sardine dead-bait set on two sets of treble hooks fished beneath a sliding float rig as per the JW book.

Fishing for barbel in an adjacent peg were Paul Smetham and his wife Coleen who very kindly took the photos of me with the only pike that I caught on the day, however it was a "Personal Best" that was weighed on my scales and then on Paul's digital scales at just over 19lbs!

The pike gave me the best experience that I have ever had from over 60 years as an angler.

The float moved exactly as described in the John Wilson book as the fish picked it up and swam away with it and when I hooked in to it the "FUN" began, it lunged and stripped line from my spool it even did a "Tail Walk" while try as it might to throw my hooks.

However even as well prepared as I was the fish had some revenge, all that I can say is watch out for the teeth.

The membership fee for the year 2019 has already proved it's worth to me in December 2018, thank you so very much.

I have attached a photograph that I hope you would be happy to share with the BAA Membership and the wider Angling fraternity.

By the way I also had the BAA Baliff ask me to show my BAA Card, this was only the third time in my life that I have been asked, so well done.